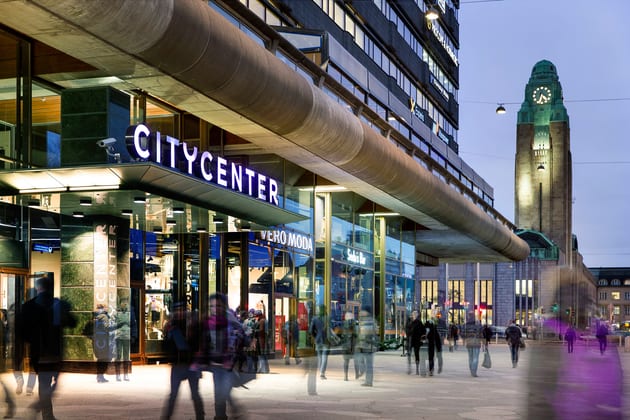 Makkaratalo (the “Sausage Building”), opposite Helsinki Central Railway Station, turns 50 this year. In honour of this milestone, the Citycenter shopping centre and the owner of the property, Sponda, are planning to beautify the building’s distinctive “sausage” with flowers. The winner of the competition will be revealed during February, and the artwork will be put in place in May.

Makkaratalo (the “Sausage Building”), opposite Helsinki Central Railway Station, turns 50 this year. The monumental rounded concrete ledge surrounding the property will be adorned with beautiful flower arrangements this spring.

In the late 1950s, the architect Viljo Revell was commissioned to modernise the commercial block in central Helsinki. In partnership with Heikki Castrén, Revell designed a modern commercial property that took advantage of the new techniques that had been developed for building with concrete.

The duo’s designs proceeded to the implementation phase in 1964, and the beam-and-column structure of reinforced concrete was completed in 1967. That same year the Asematunneli tunnel underneath the Central Railway Station was connected to Makkaratalo and to the Aleksi-Hermes property. These all together formed the Citycenter complex.

The Citycenter was well received in its day. The manager of the shopping centre, Tiina Fågel, recalls that Makkaratalo had its heyday in the 1980s and 1990s. In those times, the Citycenter had an impressive range of restaurant offerings. Among the newcomer restaurants were a branch of the now-defunct Carrolls fast food chain, and the legendary Omenapuu.

Makkaratalo has also received a generous amount of visibility in cinema. The massive building site flashed by in Risto Jarva’s Onnenpeli (game of luck) in 1965. Later, in 1980, the shopping centre was seen in Tapio Suominen’s Täältä tullaan elämä! (Life, here we come!).

Ownership of Makkaratalo was completely transferred to Sponda in 2005, at which time a major renovation of the Citycenter got underway.

”Before that, Citycenter was more of a retail location than a shopping centre. The aim of the renewal was to create a coherent whole in which it was easy to get around,” Fågel says.

Makkaratalo’s interior spaces were completely renewed in the restoration. The facade, however, was restored with much more restraint in order to do justice to its historical value. The building’s trademark “sausage”, the massive cylindrical concrete ledge around the building, was preserved for the delight of passersby. Only the driving ramps leading up to the car park on the second floor were removed as part of the conversion of Keskuskatu into a pedestrian street.

Throughout its history Makkaratalo’s appearance has been criticised, often harshly. Nowadays, however, it is considered an integral part of the capital’s streetscape, and an emblem of one phase in architectural history. In recognition of this, Citycenter and Sponda are honouring Makkaratalo’s jubilee year. A competition is underway in which 17 teams of architecture students are competing to design floral decorations for the 200-metre sausage around the building. The winning team will receive a prize of EUR 10,000.

“For us, the Sausage Building is a true Helsinki lady who’s proud of her spare tyre. This is why we decided to honour her with a festive outfit the will beautify the entire building throughout the summer. Our hope is that this will become the summer’s most-photographed building,” Fågel says.

HCM is a cooperative body involving city-centre property owners, entrepreneurs and the City of Helsinki. Sponda has a visible role in the initiative. In close partnership with the City of Helsinki and the other partners just mentioned, we are actively working to make Helsinki city centre more pleasant and attractive. In addition to Lovely Helsinki, HCM also arranges other events, including the annual Christmas parade on Aleksanterinkatu and the lighting of the Christmas street. “We also take an active position on questions related to the development of the city centre,” says Fågel.

Do you have memories or stories from the past about the Sausage Building? Tell us! We will publish the reminiscences during this celebratory year on the Citycenter website set up for the occasion: www.citycenter50.fi.

This is how Makkaratalo was modernised: